I leapt up to the

I screamed and shouted.

My mother came out.

We ran across the plains.

I carefully crept onto the small boat.

It creaked and rocked

In the foggy distance

It came closer and closer

Until it was so close.

Jumped onto our boat.

He had guns and bombs.

Gun in the air so we

Gave him our food and water.

A few hours later some people

Mum said they had gone crazy

I slept through the night

as the sea raged on

In the morning the front of the boat

It was a wharf in a rich country.

People stared at our ragged clothes

It was as if someone had shredded them

But at least we were safe. 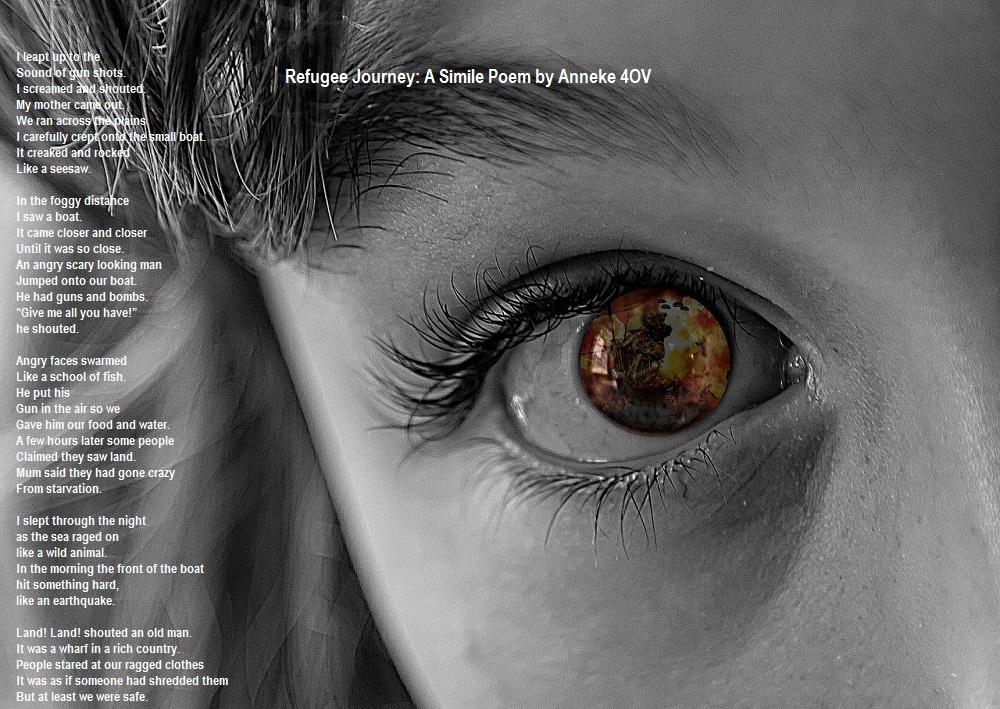 4OV has been learning about personification and writing poetry.

Here are some examples;

The river,
Flowing, spreading its arms across the land,
Staring up at the sky as it flows,
First loud and noisy,
Next silent and peaceful.
By Daniel S - 4OV

Year 4 camp was finally here!! It was really fun! We did lots of cool activities like high ropes, dual flying fox, orienteering and fencing. It was held at Morisset (Yammara Camp).

Yammara Camp is a public camp, so while we were there, we were joined by another group of Year 4's from Niagara Park. There was a meeting hall, a dining hall, dorms A,B,C,D and E.

The food at the camp was awesome! We had cereal and pancakes for breakfast, apples for morning and afternoon tea (sometimes donuts), hot dogs/sandwiches for lunch and spaghetti and garlic bread for dinner.  It was really yummy and as far as I know, no one complained.

The Dual flying fox was totally AWESOME my friend Megan and I went first. We had to answer a riddle to see who goes first second and third (The riddle we got right was-what comes after a rainbow? The letter "W"!!!!).  We put on our harness and helmet, and head to the stairs. 3, 2, 1 FLY!!!! We were soaring through the sky like a beautiful bird we were the stars of the show! I think that is was the best activity in the whole thing!

The High Ropes were AWESOME. We got strapped on and started to walk on one rope.  If we fell the clip would hold you up so you were sitting in mid-air.  We got strapped into harnesses and got helmets to wear just in case we fell (but we didn't fall). The high ropes were around about 3-4 metres tall and was really fun.  It was really funny when Mrs Voysey did the high ropes and jumped off on purpose (still attached to the harness)

One of the activities included, was Orienteering. The aim of this activity was to run around the camp, trying to find hidden gnomes. We had a sheet to write down the hat and the beard colour, along with the number. We were given a map with it to, to find what area the numbers are around. There were 15 gnomes along with a bonus gnome. It was a fun activity, running around, and talking with your friends in a team.

This week, Year 4 enjoyed a fantastic camp at Camp Morriset.

When we arrived, the first thing we spotted was the Dual Flying Fox. The Dual Flying Fox was 10 metres high and just over 100 metres long. When it was my turn on it I went with Luka. So we put our harness and we both walked off the platform backwards and away we went flying through the air for about ten seconds until we stopped.

Next we went over to the high ropes which I really enjoyed because I don't have a fear of heights. The people before me were very slow so I just flew in the air.

Next we did Orienteering which was really fun because we got to do a hunt for gnomes hidden in the trees. I thought it was really funny when Parker slipped over in the mud.

I really enjoyed camp this year! The activities were really fun. The activity I enjoyed most was the Dual Flying Fox. It was 8 metres tall! It was pretty scary at first but then I loved it! The high ropes was good to but standing on a wire that is wobbling around 5 metres above ground is really nerve racking I thought I would fall!

At camp there were quite a few of funny incidents like:

The year 4 camp was great!  I had so much fun with everything. At camp, we had good food, comfortable dormitories and amazingly fun and interesting activities. Even the bus that we went on was cool, it had curtains and everything. My favourite activity was the Dual Flying Fox. It was really long, really high and it wasn't just a normal holding on flying fox. You got attached to the fox by a harness! The other activities were High Ropes, Fencing and Orienteering. The teacher of my group joined in the High Ropes!

At camp this year there were lots of funny incident like someone got a giant wedgie because they let go of everything. Also some people had a party very late at night!

I think the campsite was very good there were awesome staff, the food was great and there were amazing activities. There was lots of room at camp and you could have a snow cone nearly whenever you wanted.

Return to top of page

We would like to pay our respects and acknowledge the traditional custodians of the land and also pay respect to Elders both past and present.

Copyright for this website is owned by the State of New South Wales through the Department of Education. For more information go to https://www.dec.nsw.gov.au/footer/copyright.